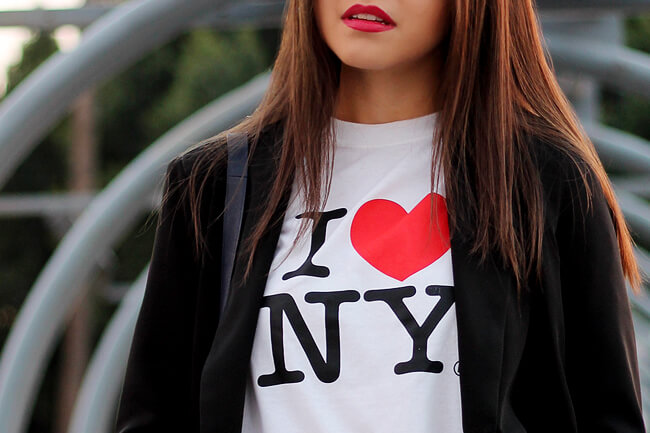 While most of the times shirts have little to no message at all, other shirts become iconic marketing campaigns. In the 1980s Frankie was telling everyone to “relax”, while it’s hard to go a day without someone displaying how much that they “Love NY”. It’s interesting to note that out of all the clothing and accessories out there, the simple t-shirt is the item that makes a lasting impression.

From the birth of new pop culture sayings and memes to making hard political stances, printed tee shirts can make your message a reality. Effective, inexpensive, and versatile, printed shirts have some of the most successful ad campaigns, and some even span decades.

Why do so many people use shirts for their promotional needs? Because with just a small budget, shirts offer so many benefits, including:

Start with a Creative Idea

Because shirts are so easy and cost effective to produce, it’s easy to see the same message made by dozens of different designers. For every one unique campaign message there are numerous “Keep Calm and Carry On” variations, or rip offs of “I <3 NY” for whichever city they’re being sold in. Adding to these messages simply becomes white noise; if you want your message to have an impact, it has to be stand out. Creative ideas don’t have to be difficult, either; at minimum, the best shirt designs take a playful or unique look at the brand’s logo and use the shirt as their personal blank canvas.

That said, there’s a lot to be learned from the more successful marketing shirts.

No, these aren’t the ones you buy to avoid washing them. This simple, yet effective, design features a drawn face of some kind so that when the wearer pulls the shirt up over their face, it’s almost like a mask. This was first introduced for the 201 World Cup, but has been used across the Internet for many different types of shirts.

One of the more unique offerings in the world of athletic wear are shirts that are said to “measure” how much of a workout you’ve had based on the amount of sweat that forms on the shirt. Many attribute the first of these designs to GLP Advertising and Design for a marketing campaign to promote a personal trainer service in Toronto and has spurred many copycats.

No, not a shirt promoting a movie; a shirt that is the movie. Just a few years ago in 2013, soda giant Coca-Cola sent out hundreds of shirts all around the world to their most loyal fans, employees, and others. They didn’t just pass out free shirts – when you have Coca-Cola money, you include a piece of special software.

Each of the 600 recipients made a short video that lasted a little more than a minute, which was edited together to make one big marketing movie. And while not everyone has this kind of budget, you could make a similar attempt with Instagram or even Snapchat.

While the campaign wound up becoming a flop and the creator of the movement subsequently arrested, there’s no denying the fifteen minutes of fame/infamy that surrounded the viral Kony 2012 message. This documentary was produced by the nonprofit group Invisible Children, which hoped to raise awareness about child soldiers throughout the world. And although the video went viral at the time, most people only remember the message “Kony 2012”.

The group did succeed in having the dictator arrested, and the movement did build enough attention that the US did take some action in the region. However, the controversy surrounding merchandise sales and the film’s director wound up hurting more than helping. Still, from a marketing perspective alone, it’s hard to deny the level of attention such a simple integrated message formed.

Even if you’ve never been to NYC, chances are you’ve seen someone wearing the original shirt design or some variation thereof. And while this might be the most iconic shirt campaign in marketing history, very few know about its origins. The shirt is more than a catchy design to be sold in tourist gift shops; believe it or not, it was made spearheaded by the New York State Department of Commerce in an effort to rebuild the local tourism industry.

The design itself came from Wells Rich Green and Milton Glaser, who didn’t even charge for the design, thinking it would be a flash in the pan. Today, the message is still going strong, lasting well over 40 years. 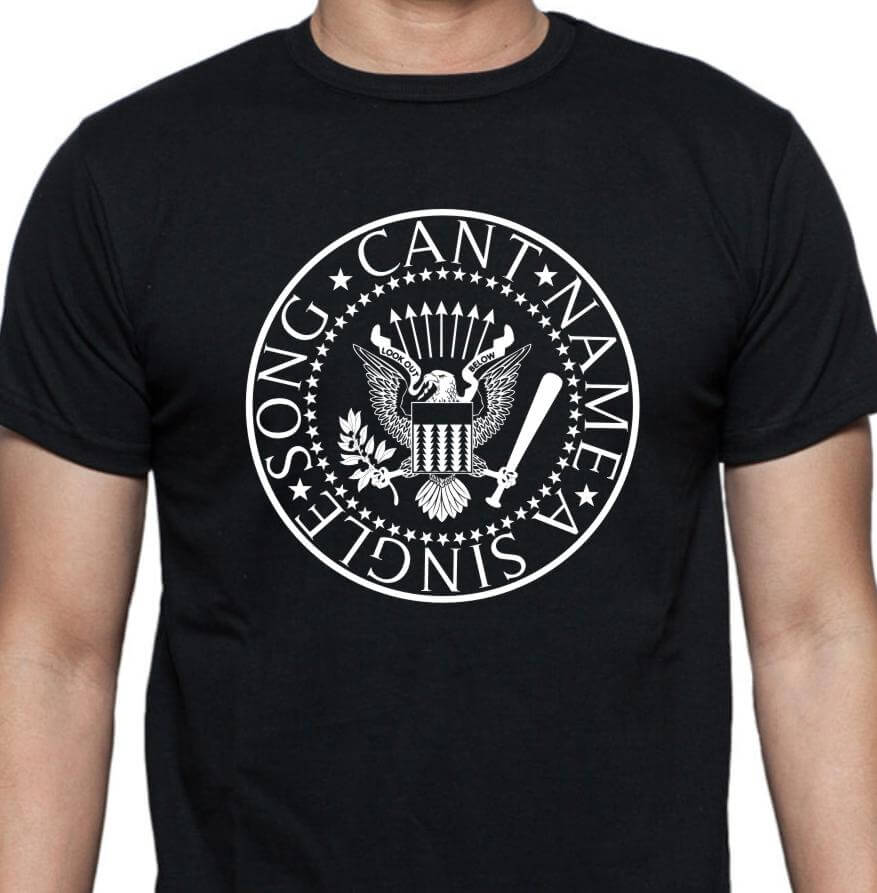 While diehard music fanatics quickly become enraged by those wearing shirts representing bands they’ve never even heard of, there’s no denying how cool classic bands featured on shirts are. And among all of the more famous classic rockers, this trend is largely attributed to none other than the Ramones.

The iconic punk group used a reimagining of the classic United States Presidential Shield logo, unaware that it would become their defining logo. In fact, despite the band not having any more surviving members, the shirt design continues to sell, and helped kick off the trend of other bands trying to find similar merchandise success.

Even important messages as raising cancer awareness can benefit from a strong t-shirt campaign. Marc Jacobs helped launch this celebrity-driven campaign to “Protect the Skin You’re In” and “Protect Your Largest Organ”. Despite much of the campaign featuring nude shoots, the accompanying shirts helped grab a large amount of media attention.

The UK doesn’t seem as fond as guzzling artificial energy drinks as their American counterparts are. However, in conjunction with the UK premier of the movie Entourage, Rockstar Energy Drink seized the moment with just a simple logo shirt. They didn’t have to take any especially creative steps; simply show up. By using the large crowd already gathered for the movie, they were able to directly market to a group that they otherwise wouldn’t have had an in with.

When the Hard Rock Café chain of restaurants first entered the scene in the early ‘70s, no one knew that they would find such a huge following with their brand. In fact, their shirts, among other memorabilia, have become collector’s items. In fact, it may be these very printed shirts and other knickknacks that have helped spur the company to the success it has today. In addition to its iconic logo, the shirts receive a location-specific branding no matter where the local store and eatery is found.

For whatever reason, using babies in marketing seems like an odd choice, and yet, campaigns that use them see at the very least a moderate amount of success. Evian originally launched their “Live Young” campaign back in 1998, but it has seen different iterations. The most recent version, lead by supermodel Gigi Hadid, featured tee shirts with stylized babies performing activities such as dancing, skating, surfing, and others. This is meant to represent everyone’s “inner child”, and it obviously resonated with many.

As Under Armour continued to find increased popularity, it did the wise thing and launched a celebrity campaign. And while the obvious choice would have been to use famous NFL players, the company took a different approach that struck a chord. The “I Will What I Want” launched in New York City and featured the empowering stories of five female celebrities, one of which being the well-known supermodel Giselle Bündchen, and how they overcame adversity to find success.

Many products designed for female use only seem to have an all-male driven marketing team. As a result, the brand message is usually nothing short of missing the mark. To counteract this trend, feminine hygiene brand Always launched #LikeAGirl, a campaign that went after stereotypes surrounding women. This isn’t the first time a company has attempted a marketing campaign like this, but it did feel like one of the more honest and sincere ones in recent history.

Launching a Movie with a Meme

Memes are perfect for gaining a lot of viral attention fast, making it an ideal choice for advertising a movie. Universal Pictures and headphone partners Beats advertised the N.W.A. biopic Straight Outta Compton by releasing many materials with the “Straight outta” line and filling it in with a number of different locations. This helped inspire a brief online trend, both comedic in nature as well as allowing others to tell their own stories.

While the idea of earth being a single republic has been featured in a number of sci-fi books, movies, and shows, the idea has been seeing a revival now that the U.S. and other countries have a renewed interest in space exploration. Currently, an astronaut usually takes with them a flag of the nation that they are from, while this campaign wants the entire planet represented as one. 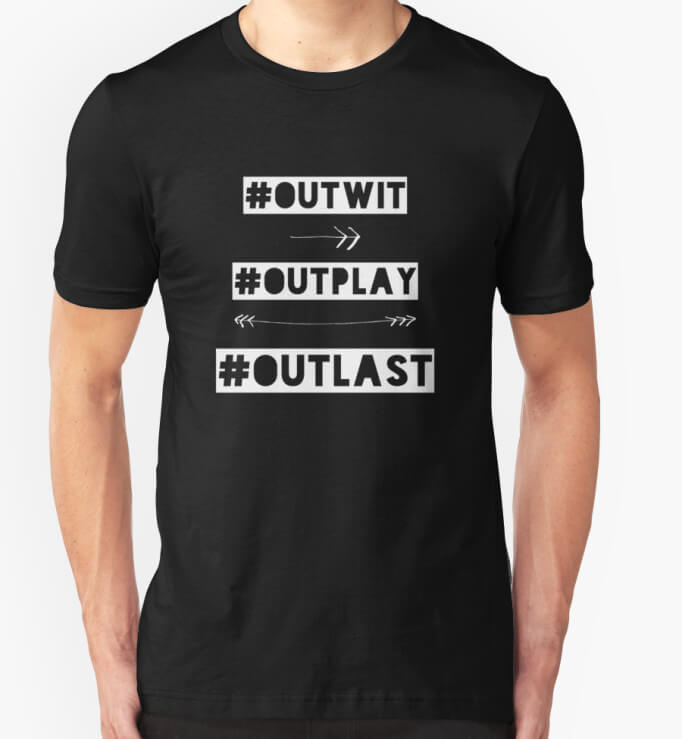 The #NoFilter tag has been used for a long time on social media, especially Instagram, to celebrate natural beauty without using the plethora of picture filters available. However, this tag can do more than offer up a #HumbleBrag by bringing awareness to those without clean drinking water around the world. By having users submit a #NoFilter image for the campaign, the organization was able to bring much needed awareness with ease.

Because shirts offer such versatility, as well as low production costs and ease of creation, they can be invaluable for a strong marketing campaign. This is especially true if the shirts themselves don’t compromise quality, balancing awareness and functionality. In fact, years after the campaign has ended these shirts can continue to find awareness for their cause as long as they remain wearable.

Even if a campaign has been done before, there’s no reason an organization can’t relaunch it. And when that happens, it helps bring awareness with both the new and old shirts. And as was the case with Coca-Cola, despite a huge price tag, it was little more than an expensive flipbook; ideas don’t have to be difficult, just engaging. And that’s why the simple t-shirt will always be the preferred method of marketing; it’s simple, yet creative, and fun for everyone involved.

How to Score Awesome T-Shirt Reviews & Reviews on Popular Blogs

Don’t Want to Sell T-Shirts Forever? Build a Business Asset Then Flip it!

Let’s brutally for a moment- none of us want to be selling t-shirts indefinitely. By…